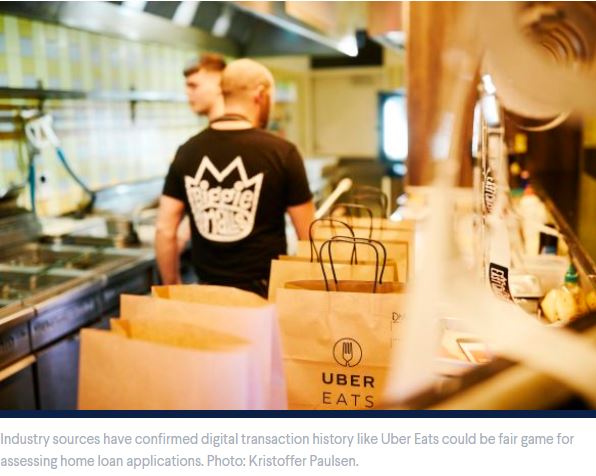 Could Friday night's take-away curry cost you approval of your next home loan application?

Big changes are afoot in the industry thanks to “open banking” — a yet-to-be-legislated scheme that will allow banks access to consumers’  financial data at an unprecedented granular level.

With the permission of the customer, their financial data would be shared with other accredited financial institutions. Within 12 months, all Australians banks will be brought under the scheme.

Banks currently look at grocery bills, medical expenses and utility bills to assess a borrowers’ household expenses and their ability to meet their repayments.

But under the proposed changes, customers’ digital spending habits like their Uber Eats or online shopping history could be fair game when it comes to getting approved for a home loan, industry sources confirmed.

Linda Veltman, general manager of credit risk at ME bank, said the collection of such information ultimately benefited customers.

“If you ask them how much they spend off the top of their head, it would be very different to what their spending habits have been over a period of time due to the fact it’s so easy to jump online and make a purchase,” she said.

Recent comprehensive credit reporting legislation and the open banking initiative have each pushed the industry forward to better understand customers’ spending behaviour and, in turn, better assess their creditworthiness, according to Ms Veltman.

She said having access to a customers’ financial footprint would make applying for a loan easier “because the information will all be available, no matter who you go to”.

Steve Mickenbecker, group executive of financial services at Canstar, said open banking would be welcomed by the industry after the Royal Commission uncovered unscrupulous lending practices.

“The banks are under massive pressure now to apply much more rigour to their collection of personal spending habits of borrowers,” said Mr Mickenbecker.

“They have to find a good and effective way to do that, and a time-effective way of doing that. Open banking will provide that solution for them.”

A Canstar survey found Australians on average spent $46.54 per order on food delivery, with almost a third ordering it one night per week. This equates to $2420 on delivery annually, an amount that – if accurately assessed – could affect a home loan approval.

Mr Mickenbecker said there were undoubtedly privacy concerns but safeguards were being investigated by government. Under the proposal, financial data cannot be shared unless authorised by customers.

“But the reality will become banks saying, ‘If you want a loan then you will have to give this to us.’ The reality is, lenders will build that into their processes,” said Mr Mickenbecker.

“People with sound spending habits will generally be better off because they’ll be in the position to share their own records and habits with lenders.

“People with dubious spending habits will find it harder getting credit,” he added. “The realities are, defaulting on loans puts you in a worse financial position than not getting the loans in the first place.”

A spokesperson for the Australian Banking Association said strengthened lending requirements in recent times had led banks to exercise greater caution, but open banking reforms would bolster it even further.

“In the future there is no doubt that the open banking reforms will make it easier for customers and banks to share detailed information to speed up the application process and make the assessment of expenses more reliable.”

The four major banks are expected to make credit and debit card, deposit and transaction account data available under the open banking framework by 1 July 2019.